A few years back I was asked to speak at work about raising a child with special needs.  I remember speaking to the group along with another co-worker who was raising a child with Down Syndrome.  One of the things I spoke about was the psychological effect autism had on a parent, since unlike disorders like Down Syndrome, an autistic child doesn’t ‘look’ autistic.  They dont have any distiguishing physical characteristics.   I’m in no way saying that raising a child with other disorders is easier.  And I definitely don’t claim to have any expertise in psychology.  But I do know how I feel.  Autism is invisible, if you were to see Dayna walking down the street you would not know she had autism.

The fact that autism isn’t as evident as other disorders creates multple issues. From a parent’s point of view, it just makes it all more confusing.  Why can’t they just stop being autistic?  It’s easy to think that, especially in the beginning.  They just look so normal, so beautiful.   It’s what makes autism such as puzzle.  When you look at some of the pictures I have on Facebook of Dayna, you would never know about the issues I describe in this blog.  The funny thing about those pictures is that I usually take dozens and dozens just to get that one shot, it’s all by chance with Dayna.  Other times I just take a picture from far away of her looking in a different direction.  Careful camerawork and persistence works, and by the picture you would never know about her autism.

I truly think that it creates an internal conflict not only for parents, but also for anyone else who is affected.  Other family members, friends, and co-workers all have a hard time understanding.  “Can’t you just…..”.  “Won’t she just…..”.  A lot of sentences start that way when people talk to us about Dayna.   Sometimes people wonder if she will just snap out of it.  Sometimes people think a magical cure will work like chelation therapy, or a diet change.  It should be that simple, or so it seems.  When she was younger we would get ‘encouraging’ comments that it will all work out, you’ll see, she’ll be fine.  I know there are cases out there where some things have worked, where the child has learned to live with the disorder and excelled.  But autism is a spectrum, and in Dayna’s case she is on the severe side of that spectrum.  Again, people would not know that from just seeing her or spending a short amount of time with her.  I can’t help but think that if Dayna’s disorder was more evident, or if she was disabled physically and in a wheelchair, it would have been easier for everyone to understand.  It would have been easier to see the reality.

Being in public is another issue.  As Dayna has grown older and when we are in public, I get very self-conscious.  Let’s face it, this is more of a problem for me than Dayna, I realize that.  To me, I can’t help but think of what other people are thinking.  Someone may see me walking through the mall, with Dayna’s hand securely in mine, while Kiley or Sean are freely strolling along in front of me.  I’m holding hands with my 14 year old while my 4 year old is running free.  Maybe they see me on the beach fixing her bathing suit.  Perhaps they are watching us in a restaurant while Dayna picks at her food with her fingers, wiping sauce off food with her napkins, ripping apart her grilled cheese, and I’m not saying anything.  Would they know Dayna has autism?  Probably not.  Dayna has a tendency to pull away from me and walk right into people.  Of course she doesn’t say anything to them, and she has received some harsh glares as a result.  People don’t see her as autistic, they see her as rude, or misbehaved.  Last year we took the kids to a baseball game on a day for autism at the ballpark.  I spent the game holding Dayna’s legs down so she would stop kicking the seat in front of her.  It was autism day, and yet still the woman in front of Dayna was visibly irritated and wanted me to notice, even though she could see I was trying keep her from doing it.  I could have said something, but frankly I didn’t feel like it.  I didn’t feel like I had to explain.  I suppose that’s what I hope this blog will do.  I want it to point out that there are many children like Dayna now in the world, and while it may seem simple to just discipline them, the truth is that there is nothing simple about dealing with autism….ever.  Maybe that kid you see yelling, jumping or acting rude is actually autistic.  Keep it in mind, because you never know. 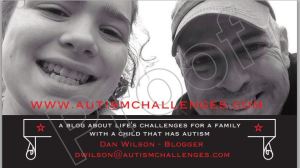 One final thought.  I came up with the idea this morning to make up business cards with this website on them, then I can hand someone the card instead of explaining in public.  I figure then they can read for themselves.  What do you think?    Would you find that odd, or would you actually check the site out?  The picture above is the proof I came up with.

So thats it, I realize its sort of a weird subject.  Someone else may have a completely different take on it, but its how I see it.  Come to think of it, its not actually about what I see, its about what everyone else doesn’t.

Thanks again for reading!

This site uses Akismet to reduce spam. Learn how your comment data is processed.