School started last Monday, lots of changes were about to take place.  Sean was changing rooms at Goddard, Kiley was starting middle school at Westminster East, and of course Dayna was returning to New Windsor Middle to the autism program.  By our standards, the week was full of the normal hurdles we are used to.   Often I look back and think it is anything but normal, but it is our status quo.  I thought it would be enlightening to give a glimpse into our week, and some of the issues we are used to dealing with….day by day.

MONDAY:  It’s the first day of school, everyone is excited.  Sunday was spent unpacking from vacation and preparing for the big day.  The morning started like we were back to last year in an instant.  At 6:40am we went in to get Dayna up, who was already awake.  It was one of those times when her unusual sleep pattern benefited us.  Just like the previous school year, everything we do is a routine.  At 6:45 the bath is run and Dayna gets in after making sure she has the TV on the right channel, the remote is placed parallel to her pillow on her bed, and she makes sure the key in our bedroom door has the key ring hanging in the perfect position.  Just after 7am Deb goes up to get Dayna dressed and I prepare ‘breakfast’…..3 pancakes, a bowl of Oreos, and lemonade in the same red sippy cup.  I know, a bowl of Oreos doesn’t sound like the most nutritious breakfast food, its ok though, she only eats the icing in the middle and throws out the cookie portion!  7:10am, Dayna comes down to eat.  7:25am, we start to get Dayna towards the door and I take her out to the driveway, Dayna’s bus picks her up right in front of our house.  By 7:35am, Dayna was on the bus, smiling and seemingly happy to be headed to school. 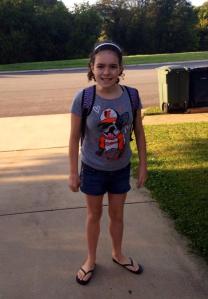 Success!  Kiley was on her bus 20 minutes later, I was off to work and a short time later Deb was off to drop off Sean at school and head to her job as well.  We survived the first day of school…..or so we thought.

Around 1:45 I received a call from Dayna’s school.  She had a bathroom accident and seemed like she had a stomach ache. They had changed her underwear and wanted someone to come get her.  I was over an hour away, I then called Deb.  After a two week vacation and just getting back into the swing of things, Deb had to leave work to get Dayna.  Picking Dayna up from school is not that unusual, that’s why it’s always been hard for both of us to be able to work.  But this time it seemed to drive home the issues we deal with, it was the first day of school and we were already being called.  The domino effect was then in place.  Deb had to get Dayna, which means she would not be able to pick up Sean on her way home. That means I would have to pick up Sean.  Problem was, we were both supposed to be meeting with a religious school for Kiley at 6pm, which I was going to drive directly to work from.  Now, Deb was at home with Dayna, I was picking up Sean, there was no way I could get from work to Sean’s school, bring him home, and then make it to our meeting.  Meeting cancelled.  Last year I posted on Facebook the Wilson Family Rules….#3 was “In this family things will change without notice.  Plans will be altered in a blink of an eye.  It happens all the time. Prepare to adapt or prepare to be disappointed….”.  Rule proven.

TUESDAY:  The morning went as planned, and it was as routine as what I described above.  Once again, Dayna was off to school happy, Kiley and Sean were as well soon afterwards.  But today we already knew there was a scheduling problem.  Dayna has a therapist after school each day.  However, it was the start of a new school year and changes to therapist schedules meant we were now without a therapist on Tuesday’s.  The company that provides the therapists knew earlier in the month, however we had just found out Sunday upon returning from vacation.  Start knocking down the dominos again, things are turning into a mess.  Same process as the day before, Deb has to go straight home from work to be there for Dayna’s bus with minutes to spare.  As a result I will have to pick up Sean.  Unfortunately I had a work appointment already scheduled that day, which meant on my second day back from vacation I was already cancelling on a customer.  To make matters worse, as Deb was leaving work to get on the highway leading out to Westminster, an accident on the highway meant she was detoured in the opposite direction.  That meant a 4 mile trek in the wrong direction down to the beltway, and a detour onto a busy local road with lights to get her past the accident.  There was no way she would make it home for the bus on time and she knew it.  She called the school who said they would let the bus know….they didn’t.  Kiley ended up coming to the rescue.  As her bus was coming into the development, she could see Dayna’s bus parked in front of the house waiting.  She got off her bus ran up the street from her stop just as Dayna’s bus assistant was calling Deb on the phone.  11 year old Kiley took ‘custody’ of her 14 year old sister and brought her inside, texting Deb that everything was taken care of.  If Kiley seems more mature than her age, it’s because she’s had to become that way.

THURSDAY:  Alarm goes off, the start of a new day.  Around 6:40am, just like every day before, I walked into Dayna’s room to wake her up.  I already had in the back of my mind that today may have a problem, I had heard Dayna up at 4am in the morning and figured either she was back asleep and we would have problems waking her, or she had been up the entire time which meant it would have repercussions later in the day.  Well, she was still awake, and she had spent the past couple of hours peeling back the drywall of her bedroom wall, paint and all.  This wasn’t the first time, she had done that level of damage about a year earlier and a few months later I repaired the wall while I also redecorated the room.  Most people would see a torn up wall and freak…..I just got Dayna up and put her in the bath.  As I passed Deb in the hallway I just said “Oh by the way, Dayna tore her wall up again”.  Stuff like that is normal for us, its equivalent to other parents stating “Oh by the way, we are out of milk again”.  In addition, Dayna was not as happy to go to school today, we had to delicately navigate the routine of the morning making sure not to upset her any more than she already was. 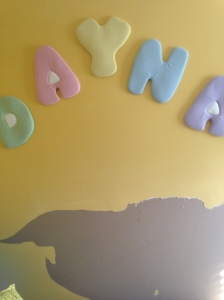 Later that day, another call from the school.  Dayna has had another accident.  This time, we had to hold firm, she had to stay at school.  I know it’s a problem for them, but the school has to be equipped to deal with the problem or she needs to be placed in a program at a school that can deal with a grown teenager with toileting issues.  Dayna, like some other autistic children, does not like the feeling or process of passing a bowel movement.  Eventually, she can’t help it and fights it as long as she can.  That can be days and days.  You can give her a laxative, but that creates other issues.  Give her a little, and she will still hold it in, but will be more uncomfortable and in pain.  Give her too much, she will completely go wherever she is…in bed, on the bus, or at school.    You know those scenes in the movies where there is a bomb and the hero has to very delicately work though dismantling the bomb?  One wrong move and BOOM!  …..it’s a lot like that for Deb and I.

FRIDAY:  Last day of the week!  We’ve almost made it!  We go in to wake up Dayna, and she would have none of it.  She did not want to go to school, and right then and there we both knew the next 45 minutes would be hell.  It was….she screamed though the bath, getting dressed, eating breakfast and getting on the bus.  I say screamed, in reality it’s a constant, loud chant of a couple of choice phrases.  “No School!”, “Stay home today!”, and “Half Day!”….over and over and over again.  The last one, “Half Day!” was her last resort.  I guess in her mind if she had to go to school she wanted to come home early.  This may sound a bit demented, but as I put her on the bus and turned to walk away, I could hear her yelling “Half Day!!” as the bus pulled away.  There I was strolling up my driveway with my coffee in hand, trying not to laugh.  I don’t know if I was just starting to lose it, or if it was because I was thinking of the driver wondering what the hell was going on, but to me something was funny.

Later that night, it was time for a bath again.  This time it was Friday night, I had a drink and I was prepared for a long haul battle with Dayna and the dreaded bathroom.  I made her sit on the toilet and I wasn’t giving in until she was done.  I’ve been known to sit in that bathroom with her for 45 minutes, it’s like a stare down contest.  Eventually Dayna wanted Deb and kept saying “Mommy?”, but I wasn’t giving in on getting Deb until she went to the bathroom and I let her know it.  “Poopy first, then Mommy.”  I kept repeating that and eventually, Dayna went to the bathroom.  My mission was accomplished.  The week was over.

And that is a week in our life with autism.  I should have titled this one: “Shit Happens…….eventually”.

One thought on “A week in the life of autism…..”

This site uses Akismet to reduce spam. Learn how your comment data is processed.